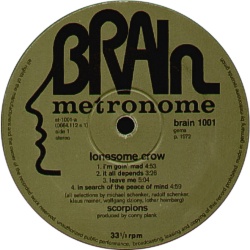 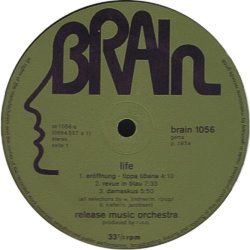 Green Brain specifics...
Brain Metronome logo on the cover = original on the Green Brain Metronome label (that is the rule, excepting 1056 Release Music Orchestra - Life, which has Brain Metronome logo on cover, but is the first release with Green Brain labels omitting the metronome text)!
Catalogue numbers are etched by hand on the run-offs (varies, depending on the cutting engineer).
Matrix numbers 0664 etc are stamped on some pressings, but etched on most (the number sequence includes all Metronome labels)
Copyright text "all rights of the...made in germany by metronome records gmbh" is low-case inward, anti-clockwise.

Pressings (revised) earlier ones have dark olive green labels, later ones are more normal green. There are many manufacturing variations too, including at least 4 different pressings of green Brain Metronome LPs, especially by more popular artists like Guru Guru and Neu!. The early  originals are conspicuous by the deeper recess (dink ring) at the centre of the label. All pressings to 1973 had  a more square outer edged and  wider run-in and 140-150g (approx) vinyl. Later pressings had bevelled edges (less run-in) and vinyl got lighter 130g > 120g.
You can also identify some different pressing by matrix number variations. For example the very first Guru Guru "Känguru" should have A side run-off matrix 1 C st-1007-A 0664.147 S1 PF with nothing crossed out nor additional.

Covers types...
Most gatefolds are glazed laminated outside, unglazed inside. A few have no laminate (i.e. 1st press of 1003 Gomorrha).
Some are matt laminated like the second press of 1003 Gomorrha, 1017 Creative Rock "Gorilla", 1020 Sameti.
There are problems with the laminate on many Brain pressings, it tends to bubble or peel, which can result in damaged covers! 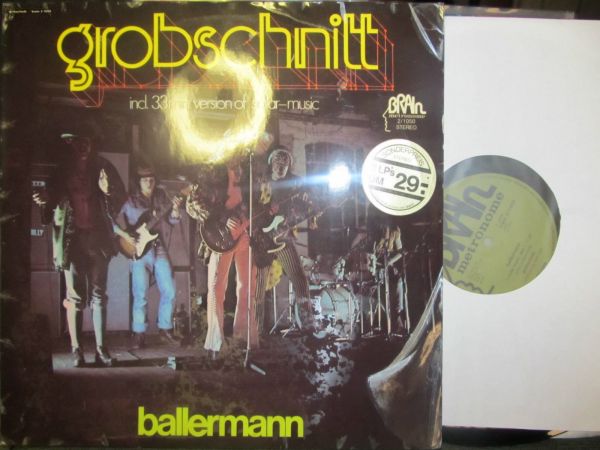 Browser text...
Most original April 1974 to February 1975 pressings can be identified by "artist name  brain 10??" info text, top-left of the front cover.
First known: Lindner & Bohn - Vollbedienung Of Percussion, Brain 1047 (released April 1974)
Last known: Release Music Orchestra Garuda, Brain 1072 (issued Feb 1975)
It is not known if all within this period had the "Browser text" although most (and many of the 2001 Brain "This Is" releases) did.
Also, to confuse matters, some retained the text on further represses, but with most it was removed.
Example...

There are also some very rare ones with cutting errors, like a first press of Creative Rock "Lady Pig" that is missing the last track, and also (reputedly) the very first press of Os Mundi "43 Minuten" is 43 minutes as it also misses the closing novelty track. Copies of Grobschitt "Ballermann" exist with a mixture of Green Brain Metronome and Green Brain labels (indicating that labels changed during the manufacture of the second pressing of this) 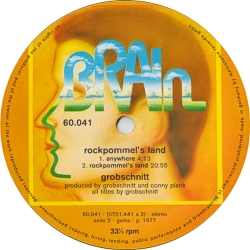 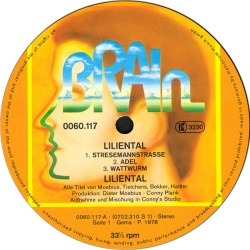 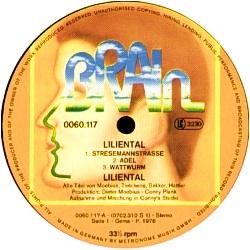 Distinctive new label more arty picture design based on the cover of 2/1091 "History Of German Rock 1972 - 1976" double.
Catalogue/Matrix numbers are stamped on the run-offs (very small on earlier pressings, larger on later ones).

See note below about leading zeros 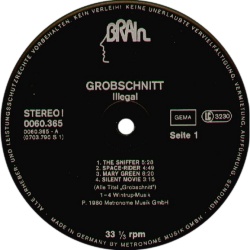 When Brain was relegated to just another Metronome/Polygram sub-label, this more simple label design was adopted.
A good few popular titles from the earlier catalogue were reissued with this label, some with original catalogue numbers.

Label code...
LC 3230 = registered in mid-late 1976. Appeared on some of the very last Green Brain, but was omitted on first Orange Brain labels.

There are many different Brain label variations since the 1980s.
Some later 1990s LP pressings have black labels without the silver print (i.e. just white text on black background).
A few more recent reissues have olive green coloured labels with black text (as per the black label design).
There are also some on orange labels as per the 1977 pressings, but have "all rights of the...made in the eu" as copyright text in small case.

Often, if you have a copy that retains the original inner sleeve you can identify the pressing date by the code number, usually something like (example from an inner sleeve of Klaus Schulze Body Love): 4912 000 1533 40.83. I was told by Klaus Muller that the first block identifies the pressing plant, the third the job number, and in this case 40.83 means week 40, 1983.